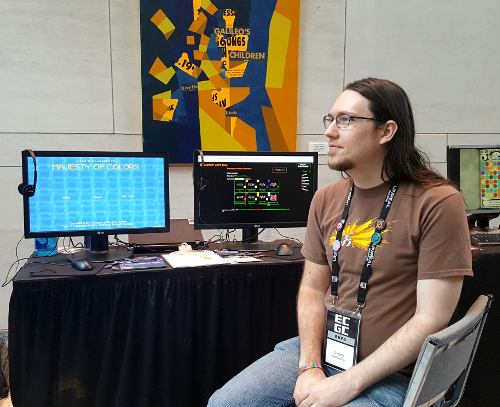 This week the two of us traveled to Raleigh to show off in the Indie Alley at ECGC 2017! We've shown at the East Coast Game Conference once before, and once again it gave us useful insight into what parts of our games folks find most interesting.

ECGC is a three-day event (Tuesday through Thursday) with the first day being a short afternoon session. The first day we had two PCs set up demoing our remaster of "The Majesty of Colors"; on subsequent days, we had one machine running "Majesty" and one showing off Exploit: Zero Day. Having two games to show was kind of nice; it meant that we were able to attract folks who might be interested in one and not the other, and some people stayed to try out both.

The feedback on "Majesty" was especially useful. Despite the old Flash version being out since 2008, we'd had little opportunity to see players interact with it en masse. Seeing the things people tried to do or didn't understand led us to add a number of enhancements and extra features to our to-do list that should really help make the game feel more responsive and alive.

In a few cases, we decided issues couldn't wait and needed to be taken care of before the end of the conference. Tuesday night we made a handful of changes:

Happily, all these adjustments worked, nothing broke, and the game was well-received the following two days. Thank you to everyone who attended! We look forward to staying connected with the cool folks we met at the conference and we're excited about revisiting the Raleigh area next year.

For more on our ECGC 2017 experience, check out our short videos of each day's setup.

Previously: FPG at ECGC 2017! Next: Disaster Management with Cabot and a Wiki