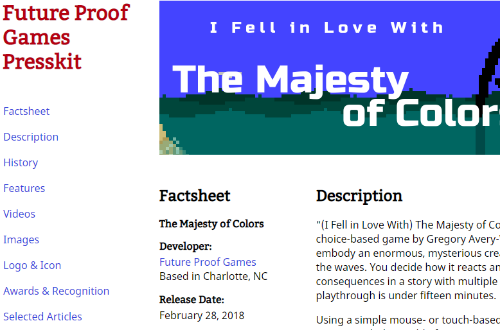 We're thrilled to announce that we've developed and released a Django port of Rami Ismail's presskit()!

Enter: django-presskit() on Github and pypi!

The original presskit() is awesome and has been a game changer for indie devs. It's easy to install and easy to modify by non-technical folks.

We wanted to create a version of presskit() that integrates into the Django admin system so that content updates don't require code changes on the server. This also supports on-the-fly sorting of quotes, awards, links, photos in your press kit.

We're currently at v1.1.0. We didn't add many features on top of Rami's version, but it's open source, so people are free not only to fork, but to submit issues and pull requests while following the Code of Conduct. We're not super fluent in managing the Github-specific mechanics of open source projects, so be patient with us as we learn.

To use django-presskit, you must be using Django. Instructions for converting from the PHP presskit() to django-presskit (especially to preserve links) are on both pypi and Github. Ask us questions on Github, via social media, comments here, anywhere.

Previously: The Majesty of Colors Remastered is on Kartridge Next: Future Proof Podcast 010