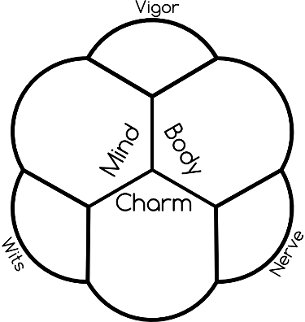 We're very pleased to announce that we will be publishing a rule book for live-action role playing (LARP) based on the Rosette rules and philosophy! Rosette LARP will be available digitally and in print from DriveThruRPG and digital-only from itch.io by summer.

We've written before about our love of LARP and that Rosette's mechanics around conflict resolution and consent would apply very well to live-action play. We've been playing in the system for the better part of a year now, tweaking rules and running different sorts of stories. It's been a blast. Our cast of player characters in this sci-fi romp has included:

At this point, we think the ruleset is unique and robust enough to publish.

From the book itself:

Rosette has an agenda: it is dedicated to a consensus-based, story-first, and improvisational approach. We believe that this creates the best social environment for creating and expressing stories that incorporate everyone's creativity.

We're currently seeking an editor for the book! We can provide samples on request to help with project estimation. If you're interested or have a recommendation, email us or message us on Facebook/Twitter.