Our upcoming roleplaying sourcebook Rosette Diceless is in its final typesetting and compilation phases! Images, ornaments, and fonts are chosen and largely placed. We want to share some of that process with you, including a major tech struggle.

Rosette Diceless is setting-free, although it includes some suggestions on world building, as well as optional character abilities in science fiction or fantasy settings. Not being tied to a particular setting meant that we had fairly free reign in choosing our style for the book.

Developing this book is happening on a miniscule budget, however, so when we decided on an aesthetic for the book, it took into consideration assets that were public domain, had liberal copyrights, or were very low cost. 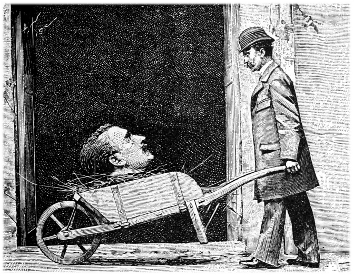 Since the book was originally for live-action roleplaying and focuses on creating story and drama, we leaned in the direction of theater: Victorian era stage magic and illusions in particular. That book includes artwork that ranges from a tightrope artist juggling knives to a large disembodied head being pushed in a wheelbarrow.

Finding that was a matter of searching through general images of stage/theater things, then narrowing down until we were able to something that provided a wide enough set to populate a book while also being consistent enough to stick to the theme.

Why bother with images in a setting-less book, you might ask? For one, we like making things with distinctive aesthetic styles. It's a good way for us to make work that stands out on a tight budget. For another, it helps break up what would otherwise be a dense packet of text—descriptions of rules and lists of options wrapped with a table of contents and an index is kinda boring.

Book ornaments are the things you see that frame pages and content on a page: lines running down the sides of pages, little squares in the outer corners of pages, decorations around page numbers, etc.

It can be tough to balance how many to use in your book to get the benefit of them—making the sidebars distinct from the main flow of text, for instance—while not adding so many that they distract from the content of the page.

The selection process was more iterative than for our image selection. We again used various freely available dingbats and flourishes with some minor edits or composition to achieve the effect we wanted. We experimented with lines along the sides and/or bottom of the page, a few different kinds of flourishes in the corners, and a couple of different boxout designs.

This brought us to a bit of a tech crisis.

The Tech of Typesetting

We try so very hard not to chase newer/hopefully better tech once we start a project. Upgrade existing tools, yes, but we all hear the horror stories of teams that developed a game for 2-3 years in Unreal Engine then hopped ship to Unity with 4K and VR support, effectively starting over from scratch on a tech no one on the team has used before. (We also see this happen in our day jobs as web developers.) 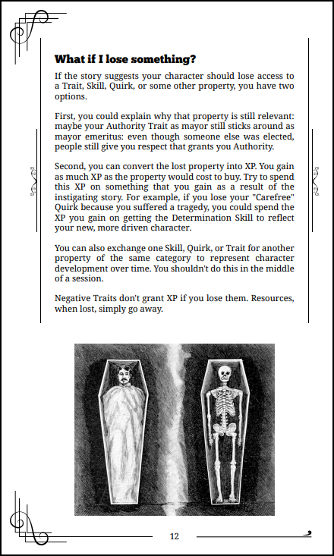 Every tech has its flaws. Sometimes the grass is greener, but sometimes you can get very deep into something complex, only to find that the tech you've moved to will require five times the effort of the original to implement it… if it can at all.

This book has gone through a few different technologies. Rosette Diceless has needed to be converted times just for doing the job: it was originally written in Google Docs, but our editor preferred to work in Word, so that was one conversion. As we've written before, we then moved the content to ConTeXt in order to typeset it.

ConTeXt, however, turns out to not quite have their documentation to a level where someone who doesn't already understand the internals of the engine can do complex things. It's also pretty difficult to figure out what will be complex.

We don't want to trash on the ConTeXt team or community here at all. It's a solid project that (as far as we can tell) does just about everything it says on the tin, but moving out of the main body of text into the margins for those ornaments proved incredibly time consuming based on the documentation available. We found ourselves scratching our heads over layer vs figure vs textbackground vs framed vs… several other things we found and undoubtedly some things we didn't.

After 20+ hours spent trying to place and align three images in the footer section of a page (and still facing having to create scalable sidebars for the boxout), we called a timeout to reevaluate.

On the one hand: this was one of the last handful of tasks left in creating the entire book. We could have toughed it out and picked a different tech for the next book. Totally reasonable, even if we'd be crying the whole time.

On the other hand: we are so comfortable with the underlying HTML/CSS/JavaScript tech of a system like Prince/DocRaptor, that we could convert the entire book and get it back to its then-current state in less than 40 hours.

So that's what we did. CSS in a paged medium like a book is a little different than CSS on the web, but it's very easy for us to work with. It's added a few weeks to the project, but it's easier to develop, will be easier to edit and maintain, and opens us back to up to easy publishing on Amazon.

All About Rosette Diceless

Rosette Diceless (formerly Rosette Dramatic LARP) is a sourcebook with an approach to roleplaying that focuses on collaborative storytelling and consent-based conflict resolution. It will be released on DriveThruRPG, itch.io, and Amazon. You can add it to your itch.io collection now.

If you're a journalist or a streamer/podcaster of roleplaying books, submit a request to receive a copy when we complete the book.

Previously: "The Majesty of Colors" Release Rundown Next: A Garden of Fonts for Rosette Diceless