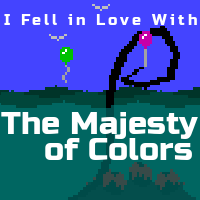 We've been generally very pleased with the critical and fan response to the game:

One of the most frequent criticisms of the game is how much it costs for the play time. That's something we anticipated, releasing a 20-50 minute game for $2.99, especially for mobile. We totally understand folks thinking that's too much, and we hope that they pick it up when it's on sale. Interestingly, our sales on iOS and Android weren't actually that much smaller than on desktop; we moved about 2/3 of the units on mobile as we did on Steam and itch.io.

On the topic of money? Sales are slow but fine. We've sold under a thousand copies. Projecting current numbers, it's going to be years before "The Majesty of Colors" breaks even, if at all. We had hoped that the game would be popular enough to justify adding a lot of the extra features on our list. Sadly, we'll probably only do bugfixes in the future, with maybe an occasional little enhancement now and then.

We only discovered a single bug after release, though, and it was one which wasn't visible to the player; it just clogged up our error reporting system. We got that fixed as well as adding the Google Play Games support we didn't have a chance to put in before launch.

One of our biggest retrospective takeaways about the final months of Majesty revolves around "crunch." We've both been stalwartly against the concept of rushing to finish a game at the cost of the developers' health, and yet we ended up doing it as soon as we saw the release date looming and a bunch of things to polish up.

Our game is better for the time we spent, but we were already spending evenings and weekends working on FPG (around our day jobs) before the crunch, so adding on extra time left us both a wreck. We intend to do better next time.

That's the state of the game! For more personal takes, you can check out Gregory and Melissa's release blog posts.

You can pick up "The Majesty of Colors" Remastered for Windows, OSX, Linus, iOS, and Android on Steam, itch.io, the App Store, and Google Play. If you don't yet have our other game Ossuary, both games are available in desktop bundles for a reduced price. We'd also very much appreciate you spreading the word about the game.