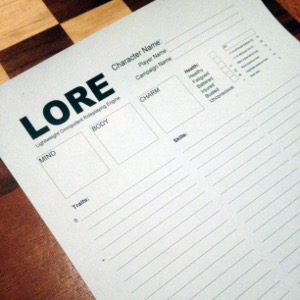 In most mainstream tabletop roleplaying games, you control your character's actions but not what happens to them. You choose how they feel about events, but not the other effects. A combination of the rules and the game master's judgment decides whether your character gets scared, hurt, or killed.

Anna Anthropy has described games as like a BDSM scene. Games are consensual abandonment of power: "Do whatever you want to my character, within the rules," you say. At best, this is a fun source of tension and adversarial playfulness. At worst... well, most roleplayers have heard horror stories about in-game sexual assault. These cases are outliers, but it's common enough to feel upset about something more minor that happened to your character. Many roleplayers treat emotional "separation of IC and OOC" as a badge of honor. Yet the feelings that are sparked by roleplay are real, and it's natural to value your character as an extension of yourself. When someone does something to your character that you don't like, they're doing something to you that you don't like.

The power that players grant to the GM is hard to revoke. If you don't like what's happening to your character, it takes a lot of gumption to object. More commonly, you either feel obligated to accept it or you remove yourself from the situation and get labeled a "ragequitter."

On forums, chat rooms, and other venues online and offline, some roleplayers use a diceless system called "freeform" or "consent-based" roleplaying. In a typical example of this system, one player would post that they "attempt to" hit another character with a sword. The target player decides, entirely from their own judgement, what happens: does the character get wounded? Do they dodge? Do they escape through luck? This system, which usually doesn't even use a GM, gives the player exclusive control over what happens to their character, but it does lack rules and mechanics to guide and enable drama and interesting play.

In the beta version of my tabletop RPG system, LORE, I took a traditional approach to roleplaying. You choose your character's actions and the GM tells you what happens, to you and the world. There are a few nods to player story contributions, such as when an exceptional success lets you narrate a result, but otherwise the social contract is old-school. You consent to the GM doing whatever they want to your character, within the rules.

As we finally update and refine LORE for a commercial release, we're changing that dramatically. One of our core principles for LORE is now "the rules and the GM decide what sort of thing happens, but you decide how it affects your character." In a similar approach to the Fate system, certain situations cause "stress" according to the rules. When your character takes stress, you decide how you're affected by it. Someone might shoot at you (or insult you, or make a point in a debate), and the rules might decide they succeed. However, as the player you pick whether that means you get a gunshot wound, you dive out of the way and get bruised, or just get terrified and more willing to give up.

At a higher level, every conflict is framed in a negotiation between players and GM: you establish a goal that the PCs want to accomplish and a consequence if they fail. In each individual scene, you're negotiating consent to the outcomes. The GM still has responsibility for framing the story, but the players have an active role in choosing what can potentially happen to their characters.

I'm excited about the possibilities for this approach. At FPG we're interested in breaking down power structures and enabling ever more egalitarian and participatory interactive storytelling. LORE isn't going very far into the non-mainstream approaches of The Forge or story games, but I think it's a good compromise that places consent-focused concepts within a traditional tabletop RPG framework.

What do you think? Have you had any issues with consent in your game experience? How have you dealt with them? Please share your thoughts in the comments.