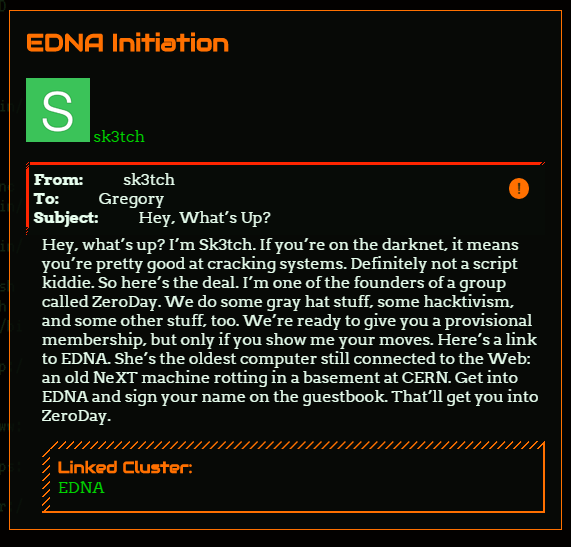 Exploit: Zero Day, our cyberpunk social puzzle game, has been in "Alpha Zero" state for almost six weeks now. A select few players have been poking at the core of the game while we prepare the framework that it will be embedded in.

Within the next month we plan to open "Alpha One," which will have the story progression for the game implemented. If you want to be part of Alpha One and get to see Zero Day before the public, sign up for our newsletter. That's where we'll be sending out the invitations.

The Alpha Zero version has the core puzzle gameplay finished. It supports browser-based creation and solving of puzzles, called "systems" in-character, which can be collected into "clusters" with a set progression. One of our Alpha players has already implemented the puzzles from Chapter 1 of the original Exploit into the new game.

We've also got our forum set up. This won't just be a place to discuss the game. You'll also be able to interact with the game's characters and potentially shape the ongoing storyline of Zero Day.

We've already done most of the work on associating text with puzzles. This lets puzzle designers include some text when you first open a puzzle, as well as some more text as a reward for finishing. A lot of the feel of the original Exploit came from the bits of spam or messages from characters that gave puzzles relevance to the story.

We're also over half done on the Job system. Jobs are like quests in other games; they come from a character, can involve decision points, and usually end up linking to clusters of puzzles to solve in order to finish the job. Most of the puzzles we provide in Zero Day (as opposed to user-generated ones) will be in the context of jobs.

A quick overview of the tasks left in our plans for Alpha One:

And for the public beta, coming later:

These features are still tentative, but they're what we've got planned at the moment.

If you want to play Zero Day in the alpha, before the public has access, sign up for our newsletter! In the meantime you can peek in at what's being discussed on the forums. At the moment it's mostly bug reports and discussion, but as plot comes online there should be more popping up.

Any questions about the progress of Zero Day or what's in store? Ask in the comments.

Previously: How to Pay for Exploit: Zero Day Next: Props to Our Alpha Players