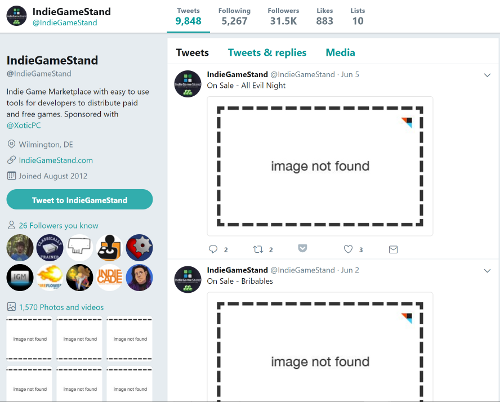 In a slow tale spanning the last four months, the IndieGameStand site (one of the places we sold Ossuary) closed parts down for maintenance, then went down completely for maintenance, and then its domain name stopped working entirely. Somewhere in there, its SSL certificate expired as well. The twitter account is silent and all of the preview images for their articles are broken, giving it the look of a column of blank gravestones.

What Does This Have to Do With Desura?

If you've been in the non-Steam indie game scene for a few years, this story will sound sadly familiar, as Desura took a similar spiral just a few years ago. After months of silence, a rumor of the owner being ill, and then more silence, Desura shut down. Ultimately, they filed bankruptcy and now exist under completely new ownership.

IndieGameStand has been silent except for the final messages about maintenance. Its new-ish owners haven't been reachable either, according to a Steam community thread.

Players are now wondering how they'll get the games they ordered and hoping they nabbed the Steam keys for those games that had them. Of even more worry is that IGS had a subscription model and that two months into the outage, they were still charging users.

As a developer, the parallels continue: both Desura and IGS operated under a minimum payout model, which meant that they only paid out once you'd accrued more than a certain amount (often something like $150-250). For a small indie studio (and a struggling storefront!) that amount might be months of sales. Devs who use IGS are now in a limbo: it's distinctly possible that they'll never see the money they had sitting in IGS's coffers—devs got nothing from Desura's final months of sales when the storefront was unattended.

Oh, No! What Service Is Next to Die?

It's understandable to hear about both Desura and IGS and conclude that indie platforms are too shaky to be viable. There have certainly been other failed storefronts and portals over the years, too.

We aren't giving up hope on indie platforms. For one thing, Steam should not be the only platform available for gamers on PC. It's a great platform in many ways, but it's not without flaws and shouldn't be able to own the market with no real alternatives. For another, there are other models that may provide a sustainable ecosystem for indie devs, players, and storefront owners.

For instance, one very nice thing about itch.io is that the transaction is a direct payment between buyer and seller, with a cut then exchanged directly between seller and itch.io. It's pleasantly transparent, and the runners of itch.io are in general very transparent about their processes. Do devs and players both feel more confident there? Is itch.io making enough money to pay for SSL certs and hosting? We're not sure, but people generally seem to like the platform.

Until there's concrete news about IGS returning to stability, we're removed our link to buy Ossuary from their site. If you purchased Ossuary there and didn't have an opportunity to pick up keys, forward your IGS receipt with a note to info@futureproofgames.com and we'll get you keys to other places Ossuary is posted.

Previously: Our Game Update System Next: We Discovered the Majesty of Fonts