Games mean things. It's unavoidable with any art form that meaning and feeling arises from a work. However, game design involves enough details and interlocking parts that it's easy for the design to become muddled and say something that's either unclear or different from what the designer would intend. This can show up in a bunch of different ways, such as the dreaded "ludonarrative dissonance" or simply a game system or section that feels out of place with the rest.

How do we keep our games consistent and ensure that they say what we want them to? One tool is a vision statement: a brief sentence or bulleted list that summarizes the ideas we're exploring in a game and can be referenced during development to keep us on track and recognize when we've gone astray.

Sometimes this is a highlighted section at the top of a game design document, while other times it's a core scene or quote from the game itself that the design is centered on. In your project, it might even be a certain inspiring painting or a song that provides an aesthetic backbone for your work.

Here is a selection of vision statements from games we've worked on and how they shape our work. 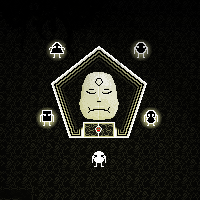 "Hell is reserved exclusively for them that believe in it. Further, the lowest Rung in Hell is reserved for them that believe in it on the supposition that they'll go there if they don't." This quote from the Principia Discordia opens Ossuary and serves as a philosophical touchstone for the whole game. The residents of the game's underworld have trapped themselves in a place of suffering due to their misguided attempts to escape the very sort of situation they've formed around themselves. While many of them are ignorant of even their own pain, they are participants in it. The few glimpses we have of the "natural state" of the Ossuary suggest that it's much weirder and wilder than most of its inhabitants understand, and is ultimately not cruel but just uncaring.

Our core design document doesn't have a single vision statement; instead, it has notes on two guiding tenets: cyberpunk and instability. We decompose "cyberpunk" into the paired concepts of cybernetics (in both the popular meaning, where humans and machines blend together, and in the academic meaning, the way in which components of a system affect and regulate each other to achieve emergent processes) and punk (subversion of hegemonic systems in service of countercultural goals, but for EZD interpreted in a deliberately cooperative way). Instability, on the other hand, is more mood than theme; we seek to keep the player a bit off-kilter at all times, unsure whether they're making the "correct" choice or where exactly the boundaries of the game world lie.

These tenets help remind us to design our stories and gameplay systems so that they feel full of side effects and rebellion, with no clear answers and a constant feeling that, even if the game's story is fiction, it could so easily be real. Without them as guidance, we could easily find ourselves making stories about being a hero saving victims from evildoers using fantastic technology, which is far less interesting than being a person with questionable methods helping people on the margins protect themselves from power-hungry organizations using abstracted versions of real-world methods.

Rosette is a family of games, in our minds; while Rosette Diceless is the first we've released, our vision for the whole family is "quick, creative collaboration". That guides the basic player experience when we design specific titles: they should feel quick to play instead of bogged-down in complicated rules, they should enable creativity and storybuilding with the rules instead of despite them, and the game master should collaborate and share control of the game with the players.

Rosette Diceless has an explicit agenda tailored to its play style and inspired by freeform roleplaying and theatrical LARP. It's consensus-based, story-focused, and improvisational. This focuses its design to create a game where players feel safe to play any character, feel able to build story together, and feel able to share all responsibility for the game evenly among the participants.

We're still doing design work on the next Rosette system, which we sometimes call by the decidedly non-final title Rosette Diced, but our current rough vision statement is more thematic: "Society wants you to play its game; take control, change the rules, play your own game." We're interested in exploring a space where a singular game master isn't the enemy of the players but does play the role of a system that seeks to limit their characters (and, in doing so, gives the players opportunities to push back).

The above are our three biggest projects, but we try to use this technique for all our work. It takes many forms: our Majesty of Colors remaster was guided by the idea "the way you remember the game looking when you first played it", while some of our jam games are as simple as "I dunno… squaredancing?". Use whatever approach helps you see a consistent focus and direction for your work.

Is there a favorite vision statement or guiding touchstone that you've used or heard of someone using in a game or other work? We'd love to hear the different approaches that have proven valuable. Drop us a comment!